Red Onion Knowledge » Contracts. What are you signing away? 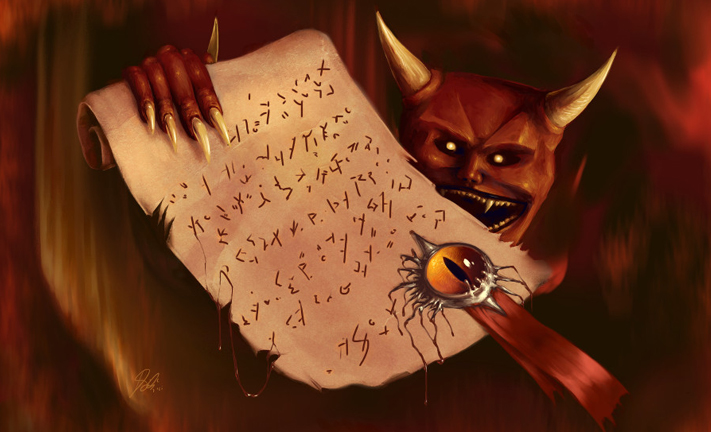 Graphic designers need to be wary of this and be equipped with a basic knowledge of the pros and cons of signing something, even if it’s unavoidable.

First and foremost, remember the contract will always be written to the clients benefit. It’s your job to make it fairer.

In a recent survey designers and creative graduates are the lowest paid. Lawyers are around the highest. This is partly where the issue lies. Larger companies have the money to befuddle you with legal jargon. You don’t have the time or money to pay to decipher it.

It doesn’t help that a lot of designers aren’t always comfortable with words, hence being more into visual design. Contracts however are often full of legal jargon and contradictions.

My first thought is that designers should charge a fee to the client if they insist on a contract, to pay towards legal advice. Things should be even.

Often contracts are signed without full understanding and unscrupulous clients can be quick to take advantage of this.

It does come down to the fact that designers must be confident and not back down. The reason the client wants the contract is that your work, in whatever guise, is valuable to them and understandably they want to protect it. However this mustn’t be detrimental to you. You’re helping them pay their own wages!

If they want an NDA and pay you big bucks maybe that’s not so bad, but often there isn’t big bucks for you – as clients don’t understand creative value. Again, it’s your job to explain your value to them.

Some of the things they ask for:

Not all contracts are like this, but it tends to be the reason.

Basically you need to be paid fairly for these demands, understand what they’re asking and be strong to turn down there demands even if you lose the contract.

Non-Disclosure Agreements are generally awful, as they sometimes restrict not only development work, but work that becomes published too. Work that is published in print, whether the client likes it or not, becomes in the public domain. Friends, family, business colleagues (in other, but similar businesses) etc. will see the material. Some NDAs block the designer from talking about their involvement with the project – forever, along with not being even able to mention the clients name. Often the client is unreasonably fearful of ‘trade secrets’ being given away. The point is that the people they are giving it to are much more likely to share the actual content, than the design agency showing a few covers or layouts. Big companies are showing an arrogance believing they own the designer and the copyright, and can protect their business by doing so. Essentially, all they are really doing is blocking the designer from growing their business.

Businesses are becoming a closed book, and not even recognising the issue, or having a fair and open dialogue about it. Just because they’ll eventually find a designer who will sign ‘anything’ it doesn’t stop the unscrupulous one-size-fits-all behaviour.

Although brands need to protect their assets, I generally believe that graphic material, wherever it is found, should be allowed to commonly be shared. This is right down to photographs of advertising hoardings, for example. No-one should stop people sharing a picture of an advert. If it’s going to be forced upon us in a public environment, we can share it too.

We will sign contracts if required, and will have them looked at by a lawyer. However, the most fair and simplest terms are covered off on a single page on our website. In our opinion this covers off most aspects of our working arrangements.

You can see it here: Basic Red Onion Design Terms and Conditions.

This website uses cookies to improve your experience while you navigate through the website. Out of these, the cookies that are categorized as necessary are stored on your browser as they are essential for the working of basic functionalities of the website. We also use third-party cookies that help us analyze and understand how you use this website. These cookies will be stored in your browser only with your consent. You also have the option to opt-out of these cookies. But opting out of some of these cookies may affect your browsing experience.
Necessary Always Enabled
Necessary cookies are absolutely essential for the website to function properly. This category only includes cookies that ensures basic functionalities and security features of the website. These cookies do not store any personal information.
Non-necessary
Any cookies that may not be particularly necessary for the website to function and is used specifically to collect user personal data via analytics, ads, other embedded contents are termed as non-necessary cookies. It is mandatory to procure user consent prior to running these cookies on your website.
SAVE & ACCEPT