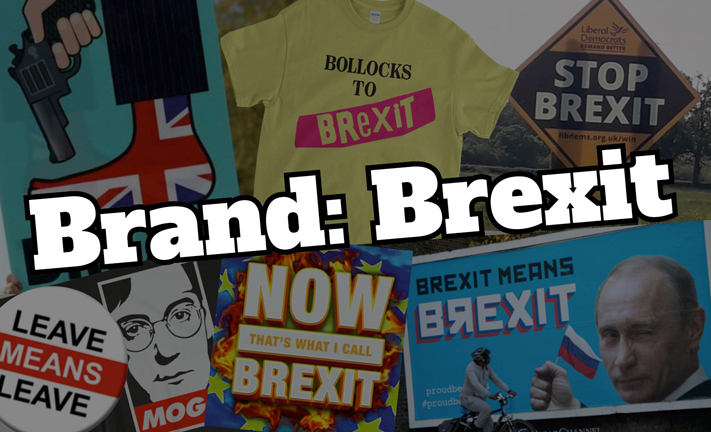 I’m sure you’re as tired as we are of hearing about Brexit. Now seems like a good time to take a look at the mass of visual clutter associated with leaving the EU, and how this contributes to the way the UK is being perceived worldwide.

Unfortunately some of these items will probably help define politics for generations. It’s not pretty and I’ve seen some terrible kerning. Let’s get on with it…

From silly badges to humorous books, the theme of Brexit has even been stitched onto socks. 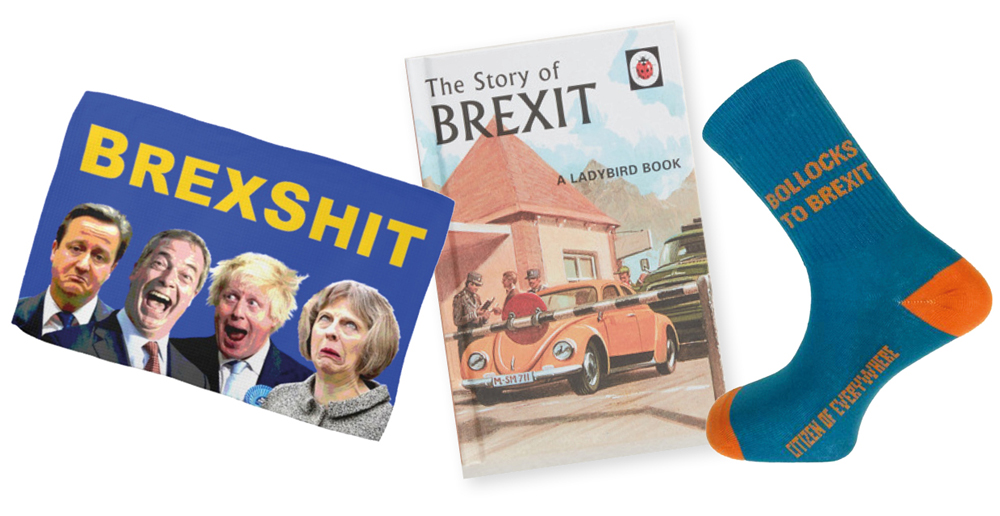 Get Brexit on a tea towel [left]. Publishing company Penguin is in on the act [middle]. You might risk putting your foot in it with these socks [right]. 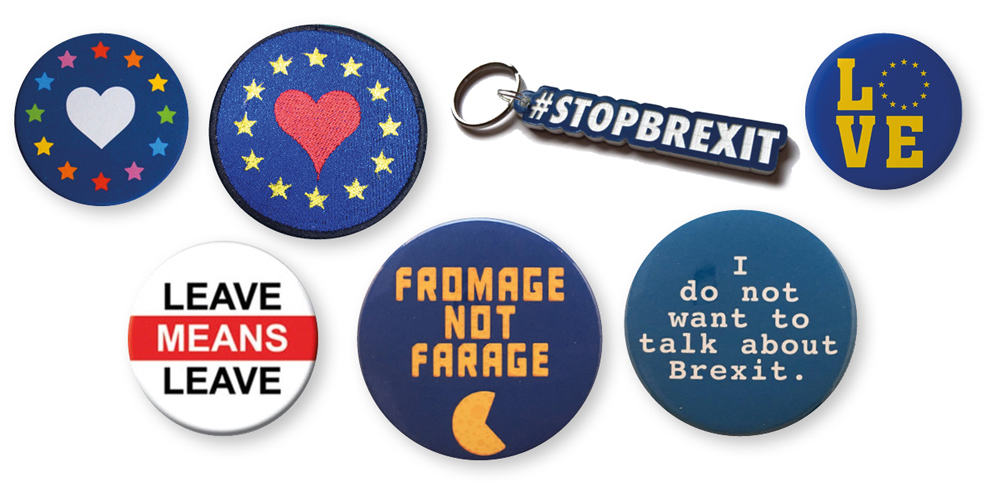 Etsy is rife with Brexit badges and keyrings.

Brexit-themed T-shirts can be manufactured pretty quickly, to keep up with the ever-evolving politics. The one on the far left celebrated an event that never happened (at least not on the date printed).

A mixture of official and non-official products. A lot of fun can be had with the whole ‘for or against’ Brexit debate.

The latest government campaign [left], and an easyJet response [right].

The Brexit Party camp were criticised for using their logo – featuring an arrow [left] – to influence voters as to which box to tick on the ballot paper – it’s possibly the only ‘respected’ design of the whole Brexit saga. [On the right], someone has tweaked the logo to push home their point. 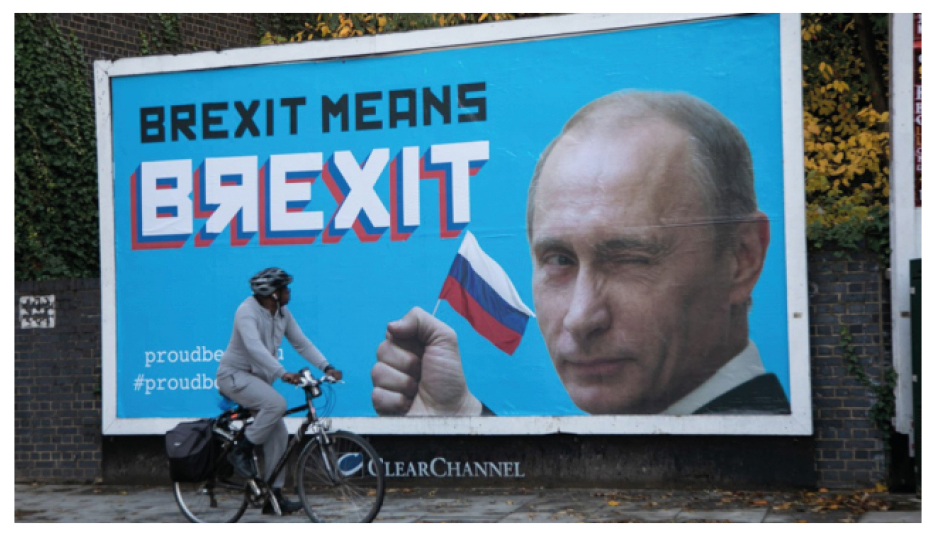 One of a range of Putin-themed posters put up in London by a satirical political group. 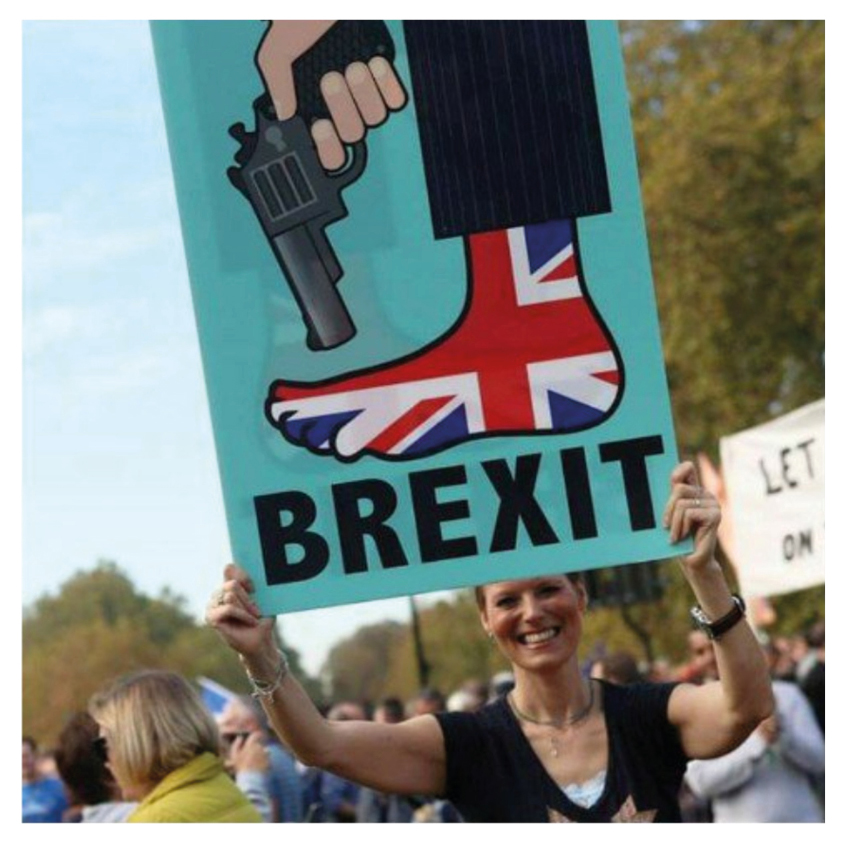 Dramatic images made it on to placards.

A range of Brexit parody material. 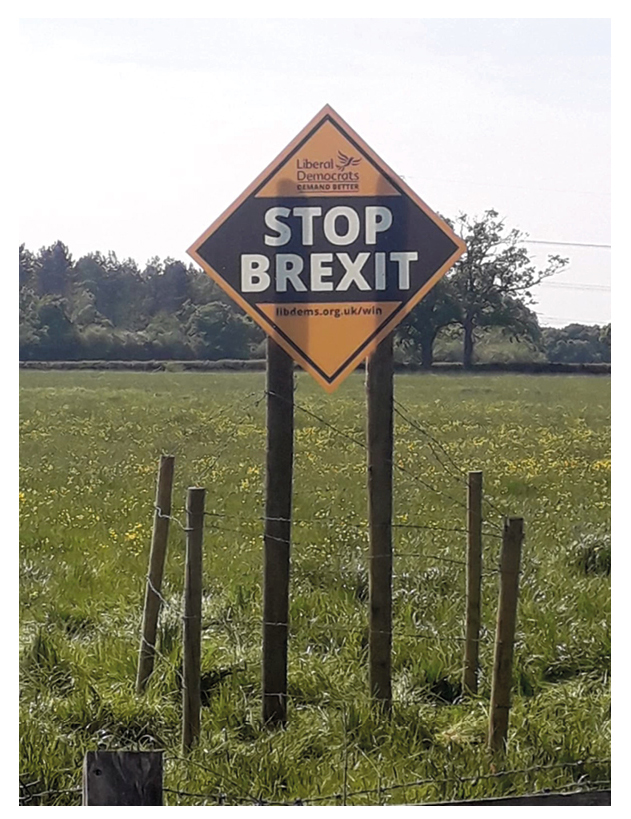 Posters in fields are a ‘thing’ – here’s one from the Lib Dems.

And finally, buses. The Brits love buses, and in politics the bus reigns supreme as a vehicle used for getting a message across. 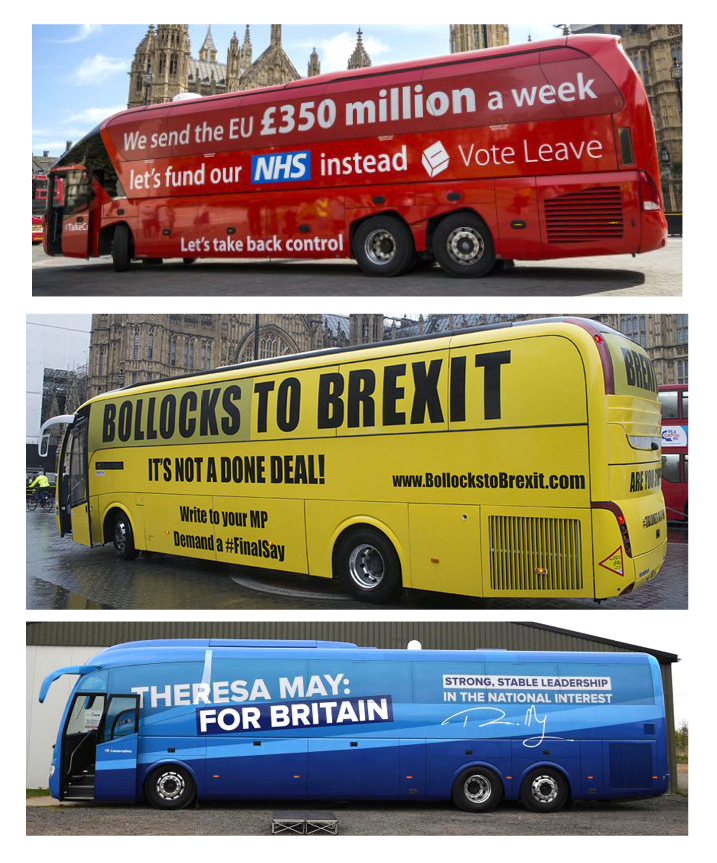 The original and most famous Brexit bus [top]. A little bit of subtlety from an independent group [middle]. And on the election trail mid-Brexit in 2017 [bottom]. 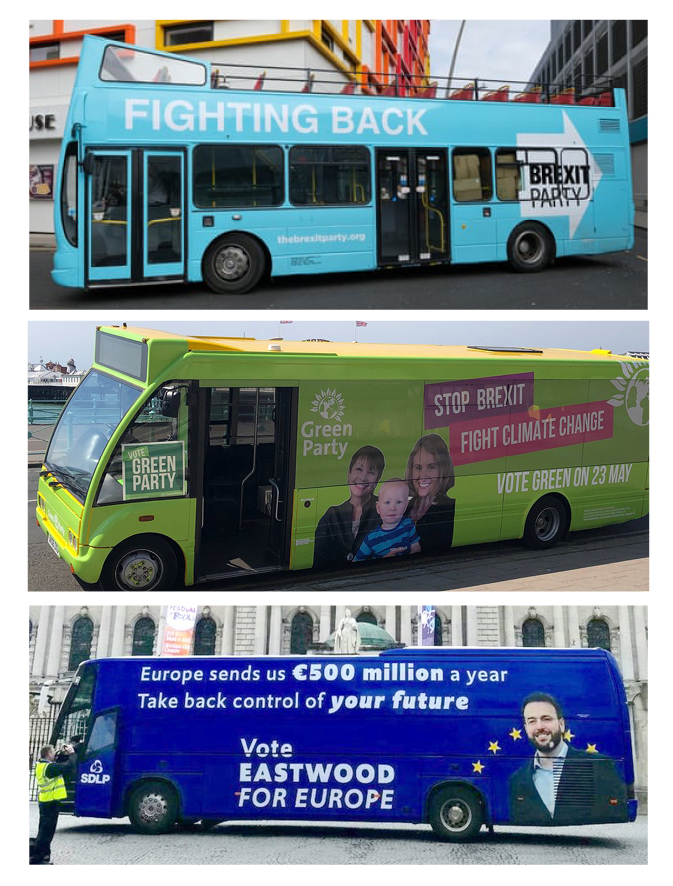 The open-topped Brexit Party bus [top]. The Green party battery-powered (of course) bus [middle]. Finally, an SDLP bus campaigning for the European elections this May [bottom].

Since the day Britain went to the polls in June 2016, the news has been drenched in Brexit sweat. Overall, the picture being painted is an anarchic one. Often out of anarchy comes creativity and a new way of doing things – but whatever the outcome, we’ll need to work hard to re-brand the UK as a united, outward looking country, rather than a nitpicking inward looking bunch!

Of course this isn’t an exhaustive list of every item of Brexit memorabilia (and we do reserve the right to update this occasionally), but we hope you’ve enjoyed a look back at what we’ve all had to put up with (so far).

This website uses cookies to improve your experience while you navigate through the website. Out of these, the cookies that are categorized as necessary are stored on your browser as they are essential for the working of basic functionalities of the website. We also use third-party cookies that help us analyze and understand how you use this website. These cookies will be stored in your browser only with your consent. You also have the option to opt-out of these cookies. But opting out of some of these cookies may affect your browsing experience.
Necessary Always Enabled
Necessary cookies are absolutely essential for the website to function properly. This category only includes cookies that ensures basic functionalities and security features of the website. These cookies do not store any personal information.
Non-necessary
Any cookies that may not be particularly necessary for the website to function and is used specifically to collect user personal data via analytics, ads, other embedded contents are termed as non-necessary cookies. It is mandatory to procure user consent prior to running these cookies on your website.
SAVE & ACCEPT